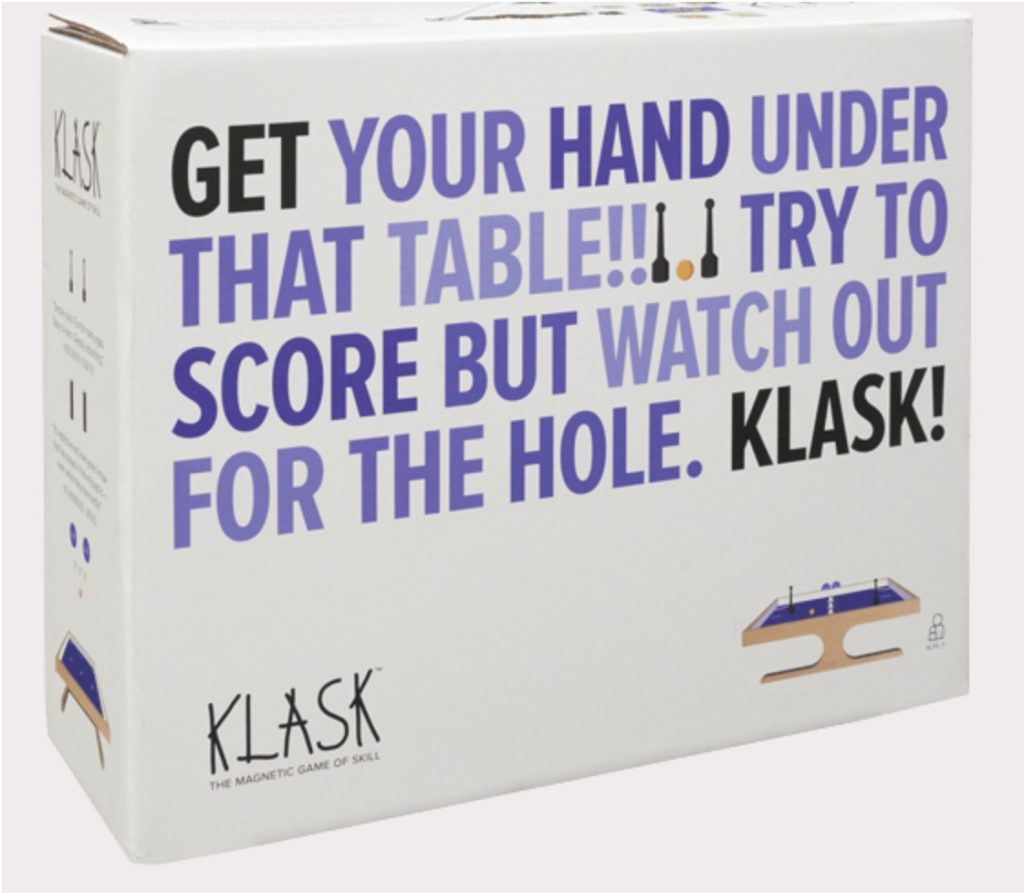 As an Amazon Associate I earn from qualifying purchases.

A few years ago, a new board game came to the United States from Denmark.

Called Klask, it’s a fun and inventive board game that used the power of magnets to play soccer. It’s really more like air hockey, but there’s no air.  Instead, there is a magnetic ball, and each player controls their striker from beneath the table, using a magnet, hitting the orange ball around the field. Players are free to move continuously all over the field and there is no taking turns. The aim is to score points by shooting the orange ball into the opponent’s goal, which is a depressed circle on the board.

How To Play Klask

There’s a couple of other ways to score (or to lose a point)   One has to be very careful NOT  to lose control of your striker  (which is easy to do because it’s connected to a magnet underneath the table).  Also, if your striker falls into your own goal, your opponent earns a point.
There are also white magnets around the playing field, and if two or more of the white magnets (called biscuits) end up sticking to your striker, your opponent also scores a point.  Games typically get played to 6, although you can make up your own rules on how much to play.

The pieces and board are made out of wood, and feel well made and of good quality.  The game is expensive (typically available on Amazon in the $45 range) but this is a game that will last a long time. 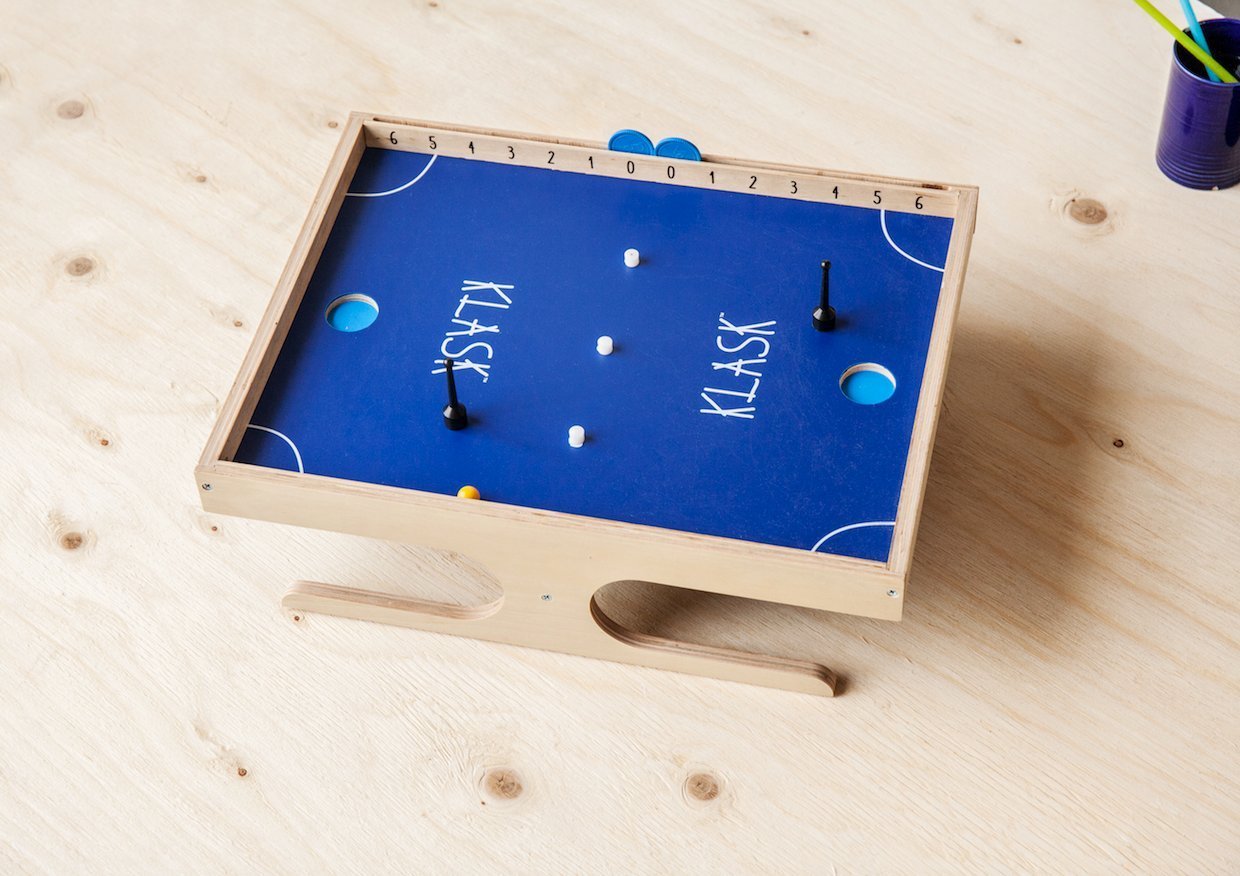 The Initial setup for Klask.

Klask is both a fun game and a competitive game.  There have been organized competitions springing up all over the world in the the last few years, and the game play is pretty fast and furious.  Here are the KLASK Tournament Rules   You can even watch some of the matches online!   This is a 2 hour presentation of the 2019 World Championships.
Here’s an ad produced by Klask that shows how to play. (It’s got a weird men vs. women theme, but it shows it off, and it has a great aesthetic.  What I love about it is that it shows this as a game that adults can play.  That’s not always typical in advertisements for board games.)

The game is quite fun for all ages and is a good game to play between a kid and an adult, or two adults. The skill of Klask is both in hand-eye coordination and in reflexes, so children can make up for their lack of hand-eye with their quick reactions.  There is also some finesse required.  If you play too vigorously, you are very likely to lose control of your striker or attach two biscuits to your striker, thus gaining a point for your opponent. 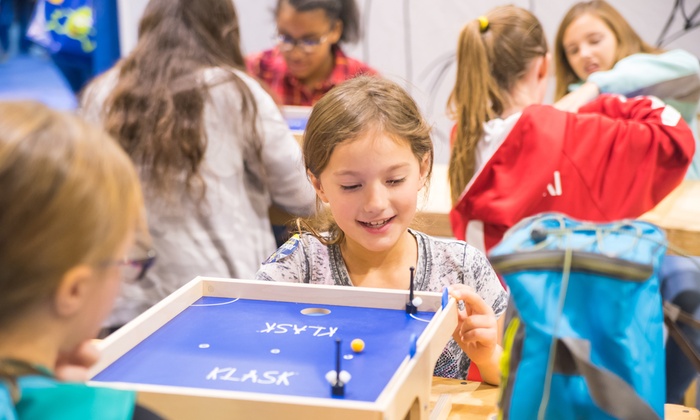 Klask:  The More The Merrier

Last year, Klask also introduced a 4 player version.  Instead of a square, the playing field is circular, and there are spots for 4 players. 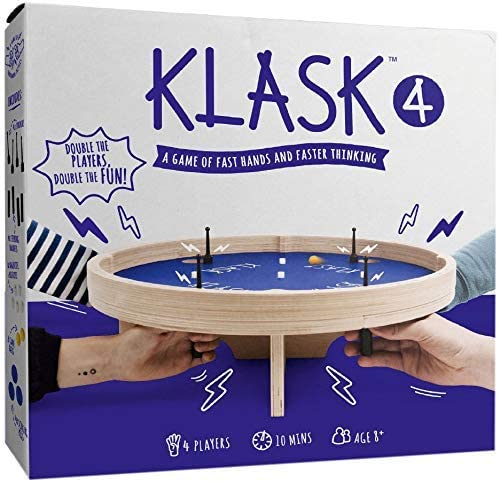 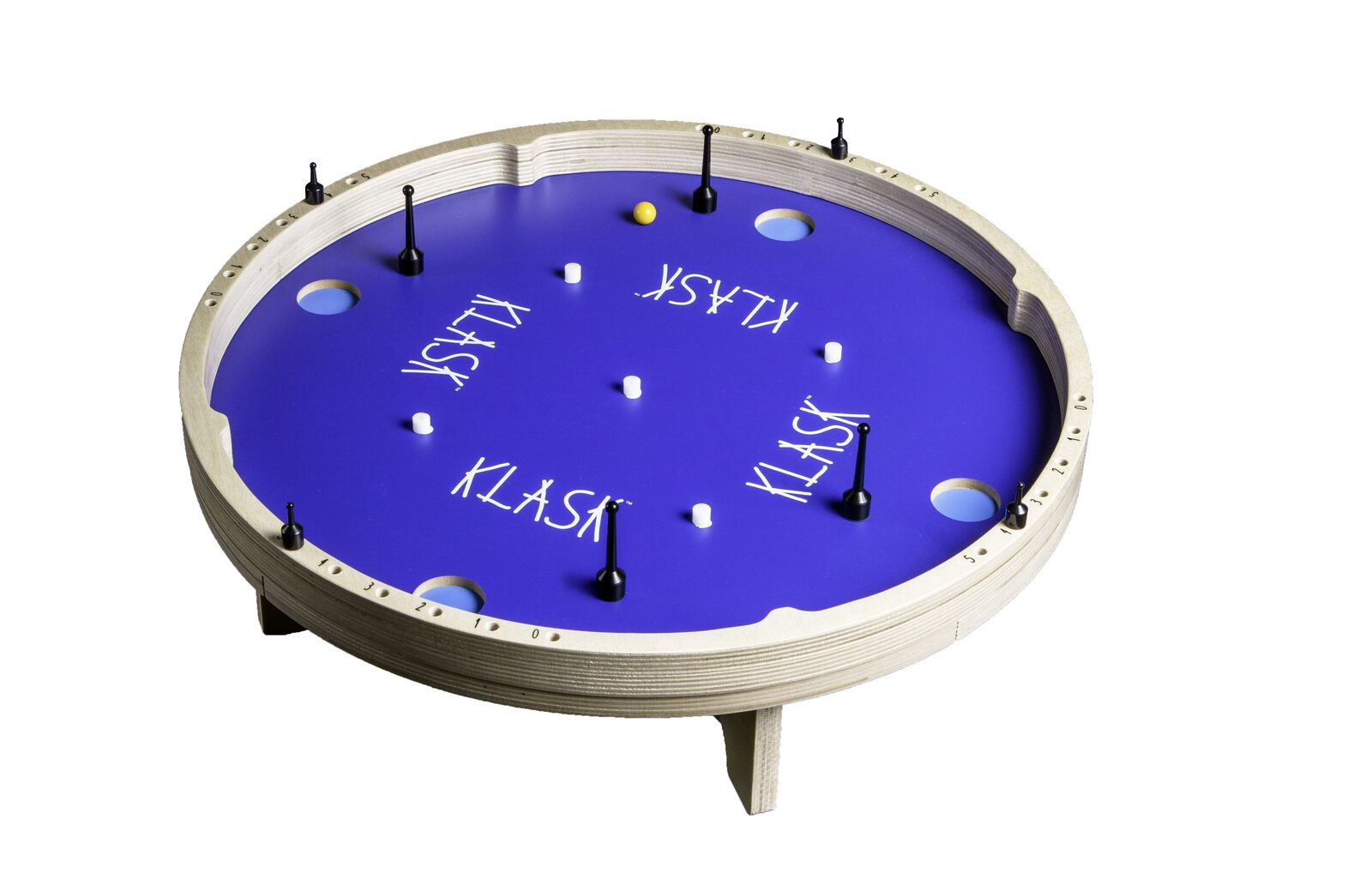 This game is a lot of fun, although it has to be played on a relatively small table so that everyone can gather around.  The best part about 4 player Klask is that there is no waiting around to play.  People can just hop in, and it doesn’t feel quite so competitive.  We have played it a few times just for fun without keeping score.  This game is slightly more expensive than the two player Klask (Klask 4 can usually be had for around $79 on Amazon) but once again, the quality, the build, and the hours of game play you will get out of your set will make it worth it.

THE SUMMARY:  Klask is a fun and competitive game that rewards good hand-eye coordination and good reactions.  You also have to have a bit of finesse in order to play.  The four player game lends itself to social interactions, and you can even play without keeping score.  This is a great and active game to keep in your game closet!

Find out more by visiting Klask online (I could only find their official Australian site in English.)

Amazon and the Amazon logo are trademarks of Amazon.com, Inc, or its affiliates.